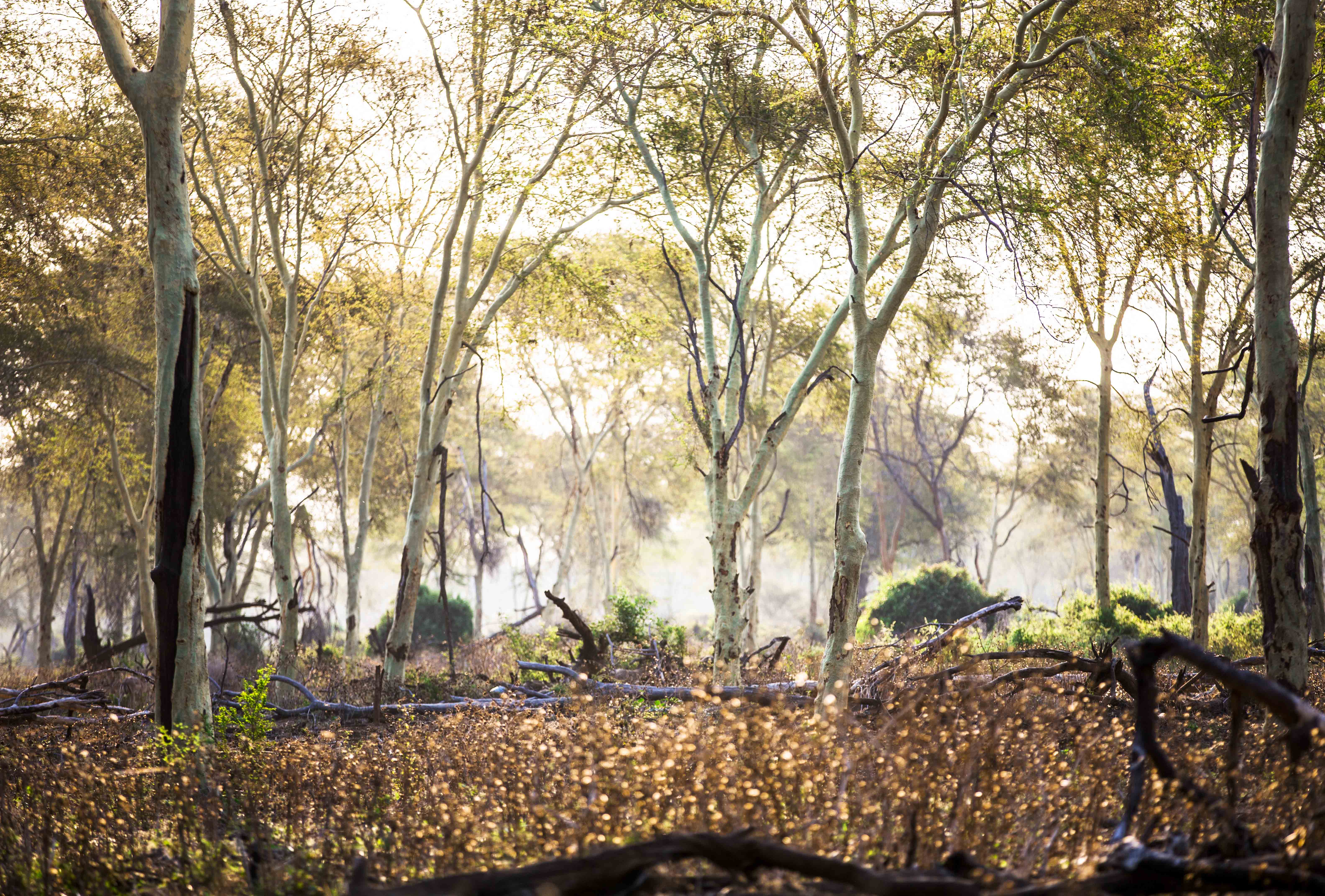 The Art of Not Walking on Safari

When rainfall gathers in the pans, we are reminded that the best trails experiences can be had sitting down.

Summer days gave us towers of cloud and sudden rain showers. Nobody complained, quite the opposite. Each ball of cumulus was a relief from the stern gaze of the sun and the heavy drops washed dust from the air, leaving the sandstone cliffs and soaring raptors in sharp focus. That’s why photographers and birders love that time of year.

Following a period of rainfall, the bush-veld transforms. Stem and leaf swell with moisture as parched plants grab their chance to flourish. Shades of brown shift to lush greens. It was not a very wet summer here in Pafuri, and the rise and fall in level of the Luvuvhu river was hard to notice. A sand bank vanishes beneath the flow then reappears a couple of days later. A buffalo can still cross without getting a wet belly. 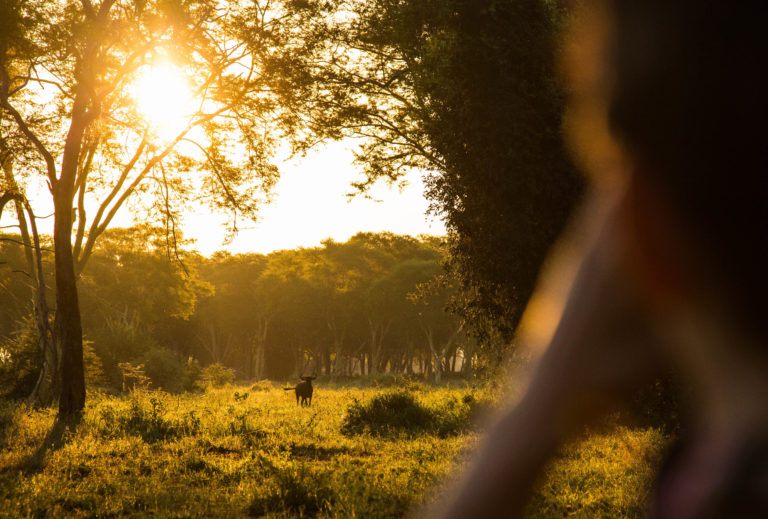 One place to witness the watery transformation is at the pans, between the camp and the Limpopo river. These usually have some water, but in a good wet season they extend to twice their size or more.

Trails guide Calvin explained the technicalities to me. A pan is formed when there is an impervious substratum that stops water from draining away, and there are a great many in the Kruger. They are endorheic, meaning they aren’t a link in a bigger drainage system, unlike wetlands such as marshes and bogs, or the pools found in river channels. Some Pafuri pans are close to the rivers and fill from the rising water, and others fill via small drainage lines.

They are commonly called sodic pans. The standing water leaches mineral salts from the soil below, so the water is not tasty for us, but ok for the animals. For them, such pans are vital sources of drinking water throughout the Kruger where few rivers flow. If they fill in summer it gives animals a chance to disperse to feed in drier areas of the park, which is why the rainy time of year is regarded as poorer for game viewing. Then as the season passes, the pans dry out and wildlife returns to the rivers. 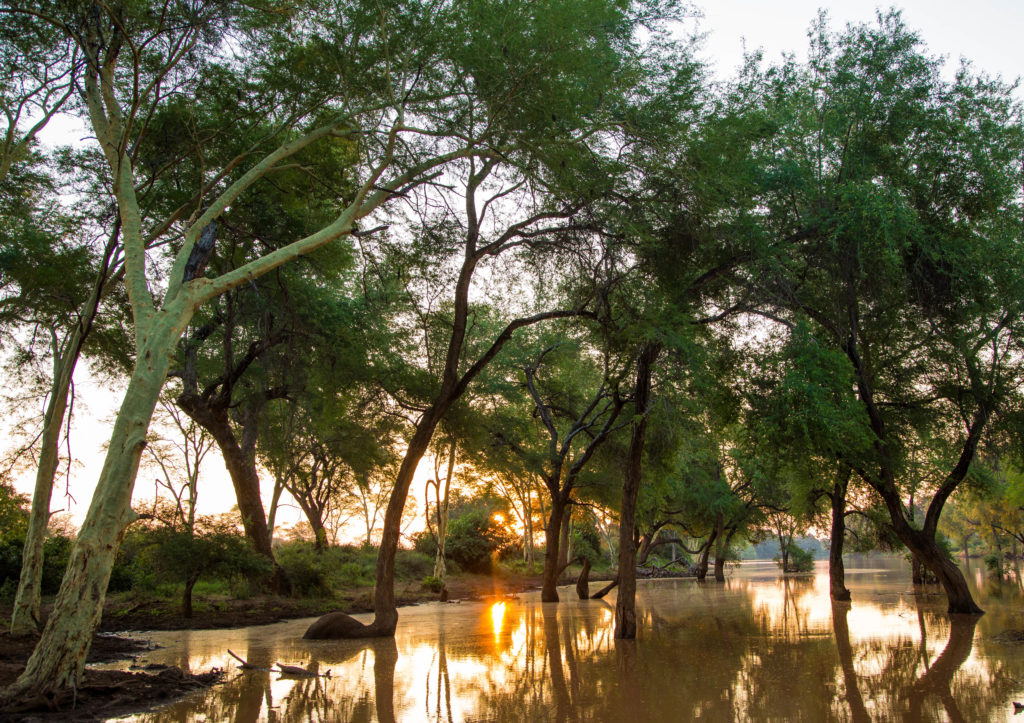 The pans are also important as wallows, where buffalo, rhino, elephants and wart hogs can get a good coating of mud as a protection from parasites and the sun.

For us, the pans are prime “sit and wait” viewing sites. It can take a while to realize that bush walking is not really about walking, but about being in the bush on foot. I see it in first time visitors who don’t sit down or take off their backpack when a group stops, thinking that every pause is a waste of good walking time. After a day or two it dawns that the stops are the main thing. The walking is just a means of moving from one interesting natural feature to the next. And we soon discover that some of the best wildlife sightings occur when we sit quietly.

When we’re on the move, it is easy for animals to detect us through scent, sound and sight. The result is the sudden sound of a commotion in the bush, the sight of a bouncing tail end, and people asking “what was that?”. When we sit still and silent, we can blend with the landscape. The animals themselves do the moving, as they graze, hunt and re-hydrate. The guides get to know the patterns of movement and the best places to wait. 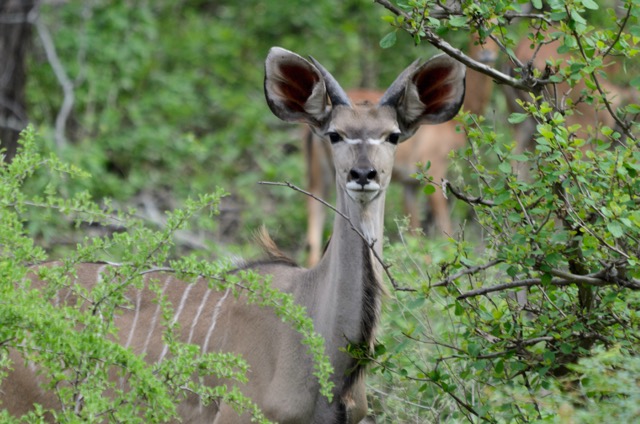 I sat with Calvin and Kobus on a ridge just above a small pan and watched a herd of impala approach, always wary. Closer and closer they came until they reached the water and dipped their heads. They were less than 20m away and never saw us. As they turned back to feeding it was the turn of a pair of black backed jackals to trot confidently to the pan. Behind them, zebra sauntered, oblivious to our group.

In the distance we spotted a troop of baboons on the move through grasslands. One stopped and stared in our direction. “He’s seen us”, whispered Calvin, his voice immediately lost in the barks of alarm from that sharp-eyed lookout. Every antelope and zebra snapped its head up, wondering where the danger lay. Calvin explained how most animals’ eyes are tuned to detect movement rather than discern shapes. But the baboons and other primates have eyesight like our own, and had no difficulty in spotting us, even from 500m. We stood and moved on, weaving through the fever trees, searching for another place to sit and wait and see what would wander into view.