Silence of the Elephants

Playful, expressive, self-confident and emotional, it is little wonder we enjoy the quiet company of elephants.

Sitting in the boma one evening, we enjoyed that camp-fire chat favourite, each picking which we love the most. For one it was the graceful martial eagle, while others chose big cats, with lions, leopards and cheetah all getting a champion. But there was one clear winner, and it’s my favourite too: loxodonta Africana, the African elephant.

As we swapped elephant stories, we teased out the reasons for liking these animals so much. Yes, they are big, and hard to ignore and also the longest living land mammal; their natural lifespan of 60-70 years is similar to that of the average human in South Africa. In the end, we agreed they are just very, very watchable, and the more we observe, the more their intelligence and personality shines through.

Kruger has more elephants than any reserve in the world, and at Pafuri Luxury Tented Camp we can watch them with little effort, as they are daily visitors to the Luvuvhu river. They need to drink copious amounts, consuming 200-400 litres at a time and their trunk can draw about 17 liters at once, that is then passed to the mouth. For every drop that is consumed, an equal amount seems to be sprayed around. Like us, they prefer to drink clean water, and will ignore stagnant pools and when necessary will dig a hole in the sand with a foreleg to get clear filtered ground water. While the adults take in water, the youngsters get up to all sorts of playful antics, charging around and sounding off.

With the camp immersed in riverine forest, it’s not surprising that the elephants feed very close to the tents at times and waking to the sound of cracking branch is a sure sign of a big browser nearby. When not pruning trees, they can be amazingly silent, which is why everyone has to take care when moving around after dark. We get very close to elephants when in game viewing vehicles, which causes them no upset. On foot, it’s better to keep a distance, both for safety and to avoid interfering with their natural behavior. 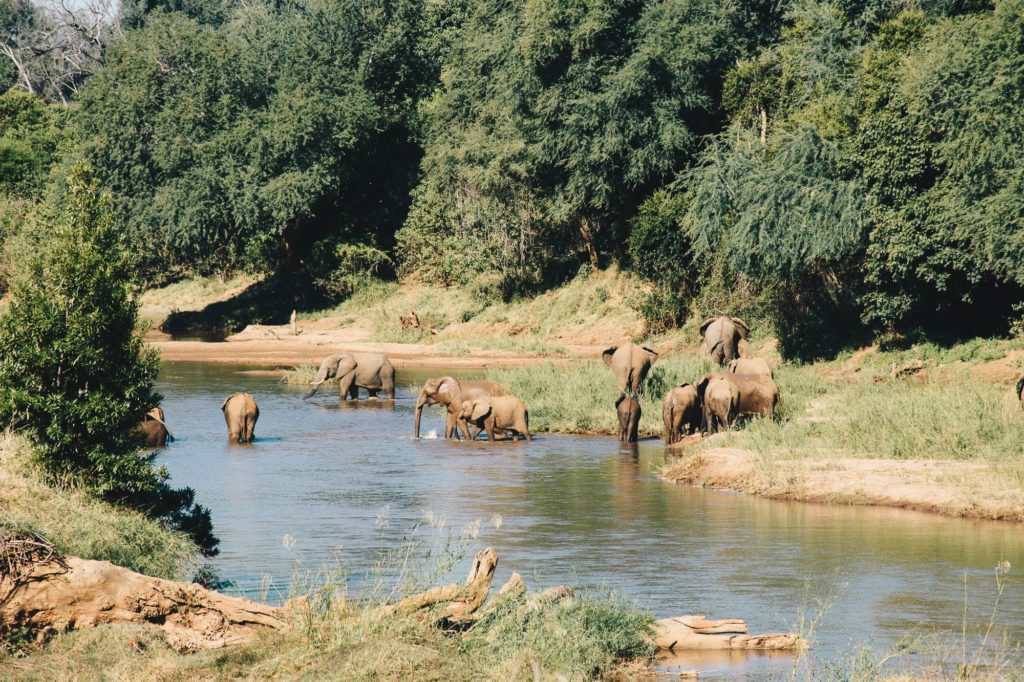 One morning I was with a small group in thick bush when guide Bongani turned to me and put a finger to his lips. I looked past his shoulder into the thickets ahead, trying to discern what he’d spotted. I could see movement but not detect a shape for a few moments, until the flick of a tail revealed that I was looking at the rear end of an elephant, not 50m away. Bongani motioned me to follow him, and we wordlessly moved to a better vantage point to spy on the busy browsing beast. Crunch, rustle, crack… so much for moving silently! No matter how delicately I stepped, it was impossible to be completely quiet. The elephant raised its trunk to sniff the air, then turned side on to check us out. Eye contact was made.

We stopped under a fig tree and watched her as she watched us. She was not bothered, and had never stopped chewing. A few more shifting shapes, and we realized she was not alone, there were eight or nine at least amidst the foliage. We could now hear the sounds of elephants feeding, the crack of a branch being snapped off, the rustle as the trunk bundles into a waiting mouth, then the steady mastication, which continued even as the trunk reached out for the next branch. Elephants feed for anything up to 20 hours a day, needing a lot of fuel, and feeding on low nutrient plants.

We were content to sit a while and enjoy the relaxing scene. The animals browsed closer, aware of us, but not seeing us as a threat. That’s when I noticed how silently they walk – unlike my clumsy steps, they have a magical way of placing their feet noiselessly. Bongani explained how elephant feet are different to ours, being covered in a thick epidermal layer that acts like a shock absorber.

Another guide – I won’t say who – told me a story of their own close encounter. He was sitting under a tree with some guests, taking a break. Guides always pick a rest spot with good visibility all around, so there are no surprises – at least that’s the idea! A sudden change in the light level made him turn his head to find a large male elephant standing just four meters away, a couple of strides for the animal. With those padded feet on the leaf litter, his approach was completely stealthy. Clearly it was not an ideal situation, but equally clearly, there was nothing to do but sit still. Jumping up and moving could cause alarm. He knew that the elephant had seen him and the group, and the body language was good – he seemed happy to share the space. So they just sat on one side of the tree while the elephant browsed for a few minutes on the other side, and moved on.

I think it is the elephant’s capacity for emotion and expression that makes us appreciate them, including their well-documented respect for the remains of dead family members. They can clearly communicate their mood and reading their body language is a key skill that guides learn. Just about anyone knows when they are angry – ears spread, standing tail, mock charges – but there are also subtle signs to spot if the animal is uneasy such as tail twisting and trunk twisting. They can absent-mindedly pluck at vegetation without eating it, swing a foot, or touch their own face with their trunk. These are all signals to us to retreat and leave them alone.

We are content to stand back, to watch, to learn, to listen to their message: “We belong here, this is our home, let us be”. It’s impossible to imagine the emptiness of this land without elephants, and it is our duty to preserve it for them.