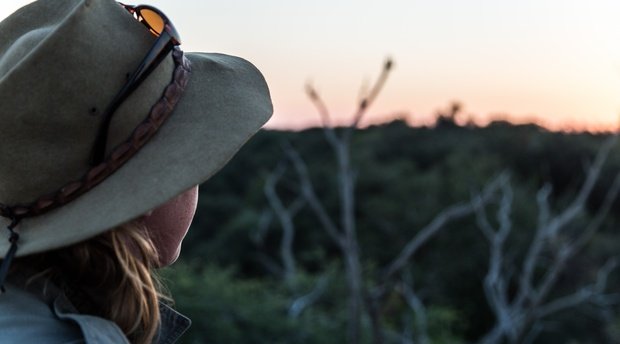 It has been hard to believe that December has already come and gone. Looking at how dry the bush is and with the current weather and lack of rain it feels more like the end of a very dry October. We have had very little rain this season. When you compare this to last year’s 352mm of rain where the grass was as tall as the game drive vehicles, then 45mm since October really is a very little. The weather has also been very hot with temperatures often in the high 30’s. The heat attracts a lot of game to the Luvuvhu river which makes some of the best game viewing in the concession possible right from the lodge, or while having a dip in the cool pool with a cocktail in hand.

“A Trail in the Makuleke Region…”

There have been many elephant herds around this December which is unusual for this time of year. Many elephants moved out of the area in November after the first rains came, which is usual, but many have returned due to it still being so dry. There have been large herds seen along Luvuvhu east and west and some with very young babies. Towards the end of the year we had a very special sighting; a large herd of elephants moved into the camp on a moonlit evening and it was incredible to see the moonlight shining on these great creatures. Buffalo have also been seen in large numbers congregating along the river.

The cats have been very quiet this month. There has been no sign of the lions since the end of November. They have been on the southern side of the Luvuvhu river. With the cubs getting now a bit older they are a more mobile and have moved slightly out of range.

The general game sightings have been great. I have never seen so many warthog babies! They are everywhere. I saw one group the other day with 4 adults and 11 babies, all about 4 weeks old. Impala babies are getting big quickly, but are always great to see.

The birding in Pafuri has been good as usual, but we are still waiting for the rains and the insects that bring the rest of the migrants. After last year’s great rains contributing to both the Luvuvhu and Limpopo rivers being full there are still a couple of large pans, such as Spokonyole and Nwambi, that have lots of water. The other pans are looking very dry and, like the rest of us, just waiting for the rains to start! Let’s hope that 2018 brings good rains and many great sightings!