At a Snail’s Pace… The African Giant Land Snail

This is my tale of the African Giant Land Snail which I would like to tell, not at a snail’s pace, but at a different pace to the human race that has adopted the rat race!

Many travellers who have travelled to ecologically healthy wilderness areas must have encountered an empty white bleached shell of Achatana fulica, the African Giant Land Snail which they could have possibly mistaken for a seashell.

Does that sound familiar?

If the answer is yes, awesome! Furthermore, if you have travelled after soft rainy days, you could have possibly been even luckier to have spotted this delicate African creature, that is one of the largest terrestrial gastropods, leisurely moving along or across you path, alive!

Living and working in the bush, the odds of seeing this creature are higher than those who travel to wild areas only occasionally. That said, the sightings of the snail always give me goose bumps and I immensely enjoy and admire how it doesn’t try to be a speedster! It is comfortable in its own shell and if an enemy tried to disturb or attack it, it would just retreat into the fortitude of its mobile home.

Having said all that, I had not been fortunate enough to spot the snail in the manner in which I recently saw it in Pafuri. I had just come back from a wonderful game drive in one of the most biologically diverse area in the Kruger National Park, the Makuleke Concession in the Far North. After unpacking the cooler box, I was alerted to the presence of the land snail in a wet area from the recent rains behind the kitchen of our staff camp.  I immediately informed my guests from the concrete jungle of this rare opportunity to see a live giant land snail! Carien and Michal Kotze from Pretoria were ecstatic to hear this. 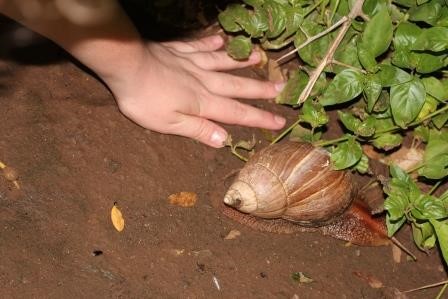 As we walked into the sighting, we were amazed by the size of this magnificent animal that was moving without our eyes easily detecting much. The only thing that appeared to be moving were its antennae like structures by which it seemed to feel its way around.

In its path, it left a mucus-like substance which looked silvery and seemed to aid its movement and protect it from damaging the tissues of its muscular foot. This silvery substance is used by snails as a signal to find each other to mate when ready for recreation and procreation to ensure the survival of the species.

As we looked closely, we spotted baby snails around and under the big snail. For me, the babies were the highlight. This was my first time seeing an escargatoire of giant land snails together. They are said to have no parental care, but from my observation, it looked like this one was the exception- unless I am just determined for my delusions not to be busted.

Snails are hermaphrodites, which simply means that each snail has both male and female organs. They can self-fertilize, but that wouldn’t be social or fun. The sexual organs are organised in such a way that they correspond to each other. After mating, which takes 8 to 20 days, eggs are fertilized and each snail lays about 100 to 500 eggs that hatch 11 to 15 days after the act. The tiny snails come out and start the life of go slow while fulfilling their Creator’s mandate, feeding on minute dead and live plant and animal matter. Over their lifetime, of an average of 5-7 years, they grow to become uniquely weird and beautiful animals obtaining dark brown shells that look like ice-creams in the cone. 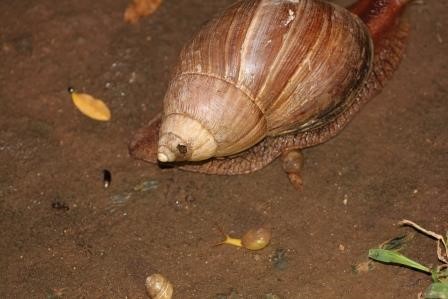 What might be the reason for them being hermaphrodites?

I personally believe that it is to compensate for the fact that they are vulnerable to predation and for being slow; a lot of them are needed to occupy their niche in a reasonably short wet period. If a mating pair are both able to lay eggs, it increases their chance of survival.

Why might the snail have been close to the kitchen? Could it have ended in the pot as a delicacy?

Snails are said to be a delicacy in certain countries like France. In South Africa, in Tsonga culture, it appears that snails were eaten, maybe not as a delicacy with garlic and butter, but as a necessity for survival! The only people for whom it was a taboo to eat the snail were the people of the family name Chauke, for whom this species is a totem animal. Folklore has it that the Chaukes, also spelt Cawukes , derived their chieftainship from learning the secret of making fire from a live coal hidden in the giant land snail’s shell from the Hlungwanis whose totem is fire. Being able to make fire, which was necessary for survival, gave the Chaukes a position of influence as others in Tsonga society needed to receive fire from the Chaukes. “Cawuke xa Humba” means Cawuke of the snail. That’s how they praise themselves as they recite their genealogy! 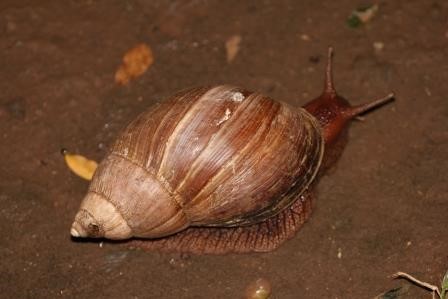 The snail transcends cultural and aesthetic value. It seems to be the slowest and weakest link, but without its valuable input (together with its allies like millipedes) the soil would be nutritionally poor, and it would be difficult to grow food for man and beast and so our lives would be subsequently poor and slow.

I therefore, as a self-appointed advocate for the snail, appeal to all of us who share this beautiful planet we have as our only home, that we take good care of our gardens without using pesticides that could exterminate snails (unless we have plans to move to Mars).

Their cause, their strokes and their tale are different but harmonious to ours. Let’s RESPECT that they are different, and we can’t fulfil their role like they do.

Silence of the Elephants