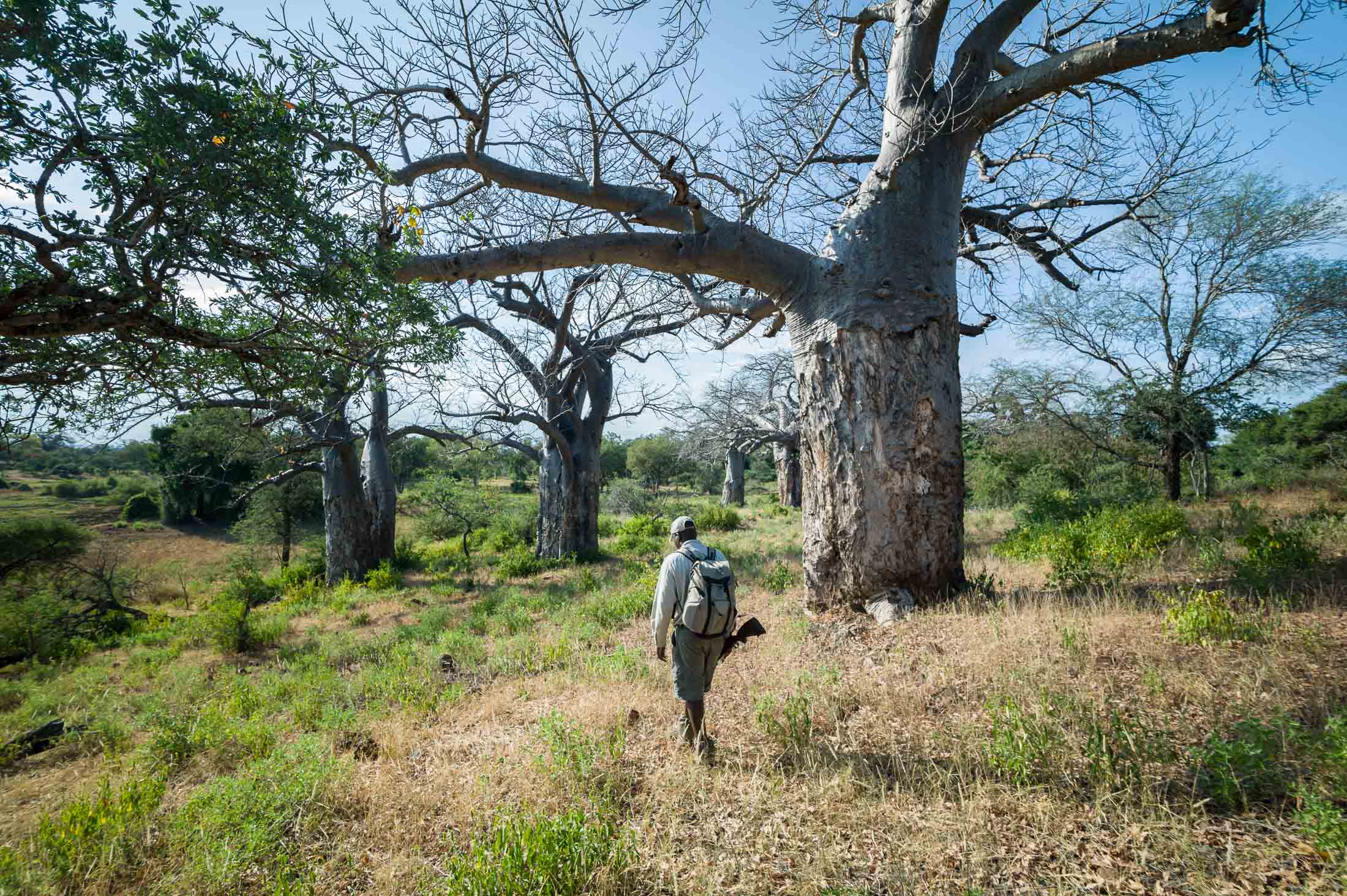 Types of Trees in Northern Kruger

For trail walkers, a shady tree is a welcome friend, and in Pafuri there are many old friends.

Trails guide Bongani returned with exciting news: a leopard resting in one of the biggest baobab trees, between the camp and Mapimbi pan. What a combination, a favorite animal in a favorite tree! 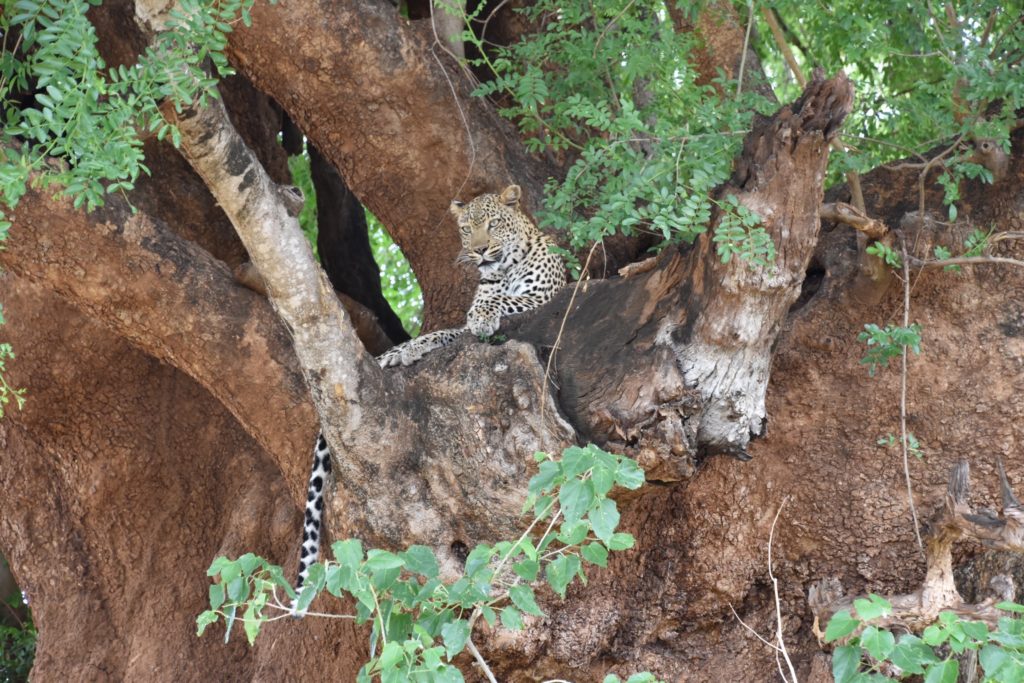 It reminded me how often trees crop up when you talk to the guides. Ask one where they saw something, and the answer might be “It was in the gorge, near the big nyala berry”. Or “just before the twin baobabs”. Or “In the mahogany tree with the hole in it”. It’s not hard to spot a pattern! They use trees as way-markers, a shared mental map of the landscape. Of course, that’s nothing new, for surely mankind has done this since our time began. And not just us. The elephants know just where to find their favorite scratching posts, while no doubt the vervet monkeys have memorized a complete A-Z of every fruiting tree in the Makuleke.

Setting off on a walk, guides don’t always have an exact route in mind. It can be fun to explore a new ridge, to follow a leopard trail, to climb to a better view. But they know that walkers will appreciate a shady spot for a rest, so that arboreal map is steering their thoughts: “If we cross the river, we can take lunch under the big sycamore fig”. “I wonder if we have time to make it to the top of the koppie, where we can have a break behind the baobab”.

We are rich in trees here, with over 150 species – a much higher variety than other parts of the park. If your image of the northern Kruger is expanses of crisp brown mopane woodland, uniformly grazed by elephants, you’re in for a pleasant surprise in Pafuri. This tropical “northern biome” is distinct from the rest of the park, and the tree diversity reflects the range of ecozones from sandstone plains to basalt ridges and the floodplains and levees of the rivers. As well as those mentioned, there are tamboti and leadwood, bush willow and buffalo thorn, guarri and sausage trees, and of course the famous fever tree forest. As with the birdlife, there are trees here that are at the southern edge of their range, such as wing-pods and propeller trees, so called for the way their nuts spin to the ground.

In themselves, the mature trees are objects of beauty. When old age or a flood takes a big one, it is like a loss in the family. The ancient baobabs are the stars, the visitor favorites that remind us we’re in the tropical zone. On an extra hot day (the norm so far this year), when animals are lying low, the guides can always fall back on their tree lore and the baobab has plenty. At this time of year, they are especially lovely with green leaves that are browsed by nyala, kudu and elephant. 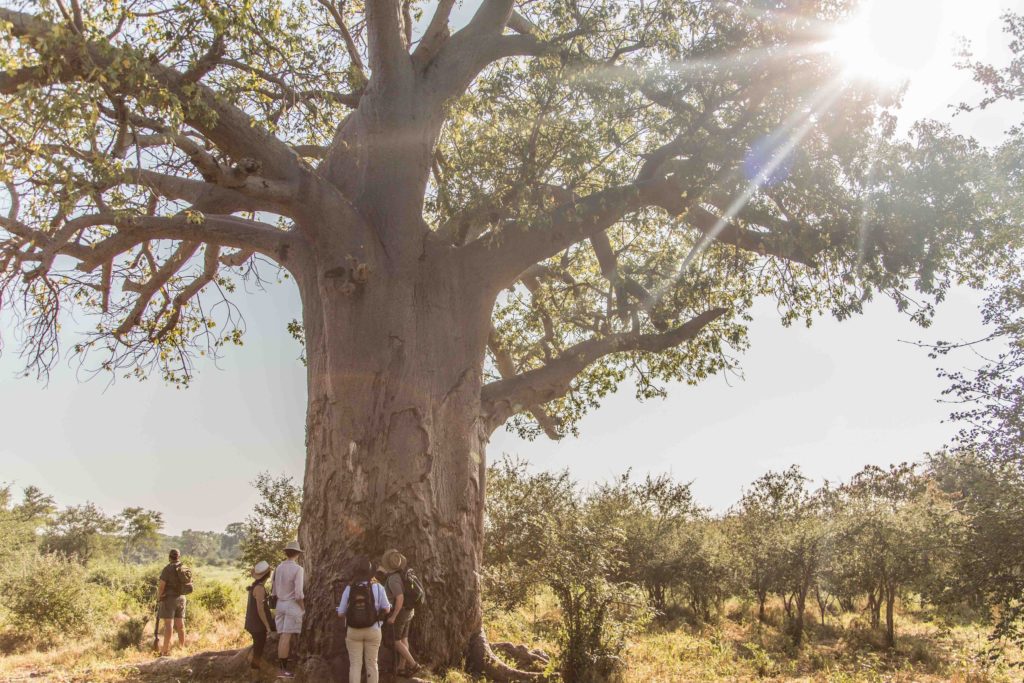 The baobabs live on a different time scale to us humans. In the arid Limpopo, they may not even get to maturity and bear fruit for 200 years. Sadly, it seems that climate change may be to blame for the loss in recent years of some of the largest and oldest specimens. Walking safaris guide Calvin de la Rey recently found a baobab embraced by a strangler fig, two giants engaged in a century long battle. A third giant had joined the fray, as some of the outer bark had been gouged by an elephant looking for moisture in the layers beneath. Usually the baobab can survive this – unlike other trees, where the bark is essential to water delivery to the branches, the baobab can absorb water through the full trunk. Indeed, humans have long harvested bark for a multitude of uses including ropes, fishing baskets and building materials. The fruit pods – if you can find one intact before the elephants – are delicious to snack.

There are plenty of reasons for walkers to love trees, but one stands out: they defend us from the heavy gaze of the sun. A good canopy makes the difference between a pleasant hike and a weary slog. Although the groves of ana trees go against the flow and lose their leaves in summer, we have no shortage of shade for trailists, and both the nyala berry and sycamore figs come supplied with buttress root systems for seating.

Away from the riverine woodlands, there’s a tree that’s famous for its shade throughout Southern Africa – the Shepherd’s tree (Boscia albitrunca). Beneath its dense crown, scientists have recorded an amazing daytime temperature difference of 21°C. They need to be approached with care, as big cats also favor them for rest or hunting cover. As well as being a source of shade, they are valued for their many traditional uses, and our Makuleke guides are happy to share this lore with visitors.