A Makuleke Menagerie – Wildlife at Pafuri

By RETURNAfrica12th Jun 2019Jan 23rd, 2023South African Getaways Blog
No Comments
Nyala, elephant and nightjars are not visitors to Pafuri’s unfenced camps. We are the guests in their domain.

I heard two sharp barks from a thicket across the river, the alarm call of a nyala ram. It’s quite different to the throaty two-tone bark of the chacma baboons which echo on the cliffs by night and day. The nyala sounded again, this time accompanied by a chorus of kek-keks from helmeted guinea fowl. I got up from the table and leaned on the railing of the deck, scanning the river. Just in time – 200m away, I spotted a leopard patrolling the sandy bank, a moment before it ducked back into cover. The alarm cries followed it downriver. As I finished breakfast, a distant cacophony of vervet monkey chatter announced its progress. It’s not surprising that they mostly hunt at night with so many noisy lookouts by day.

It was not a bad start to the day, a leopard at breakfast. In the mornings their tracks are often seen near the lodge, and even between the tents of the fly camp. Hyena and black-backed jackals are also night visitors, and it’s interesting to start the day by searching for fresh spoor.

Almost all camps in the Kruger National Park have electric fences to keep out big animals like buffalo and elephant, but not here. I was staying at the fly camp when a lone bull elephant came to browse. I’m struggling to think of ever seeing an elephant that was not feeding or drinking. The low nutrient value of the food they eat, and their large size, means they spend 16-18 hours a day foraging. This one wasn’t going to let the presence of a few humans or tents interrupt business, and he spent the afternoon pruning the ana trees. The next day, the same elephant was at the main camp, 4km away. He stepped delicately across the boardwalk by reception, reaching for green branches to snap, strip and chomp.

The layout of the camp keeps guests and staff safe. A raised walkway connects all the rooms to the central reception, pool and dining areas. When animals come close, such as that bull elephant or buffalo, staff keep a close eye on both animals and guests. It’s an amazing experience to stand so close and make eye contact with a wild animal, soaking up the sounds and scents. 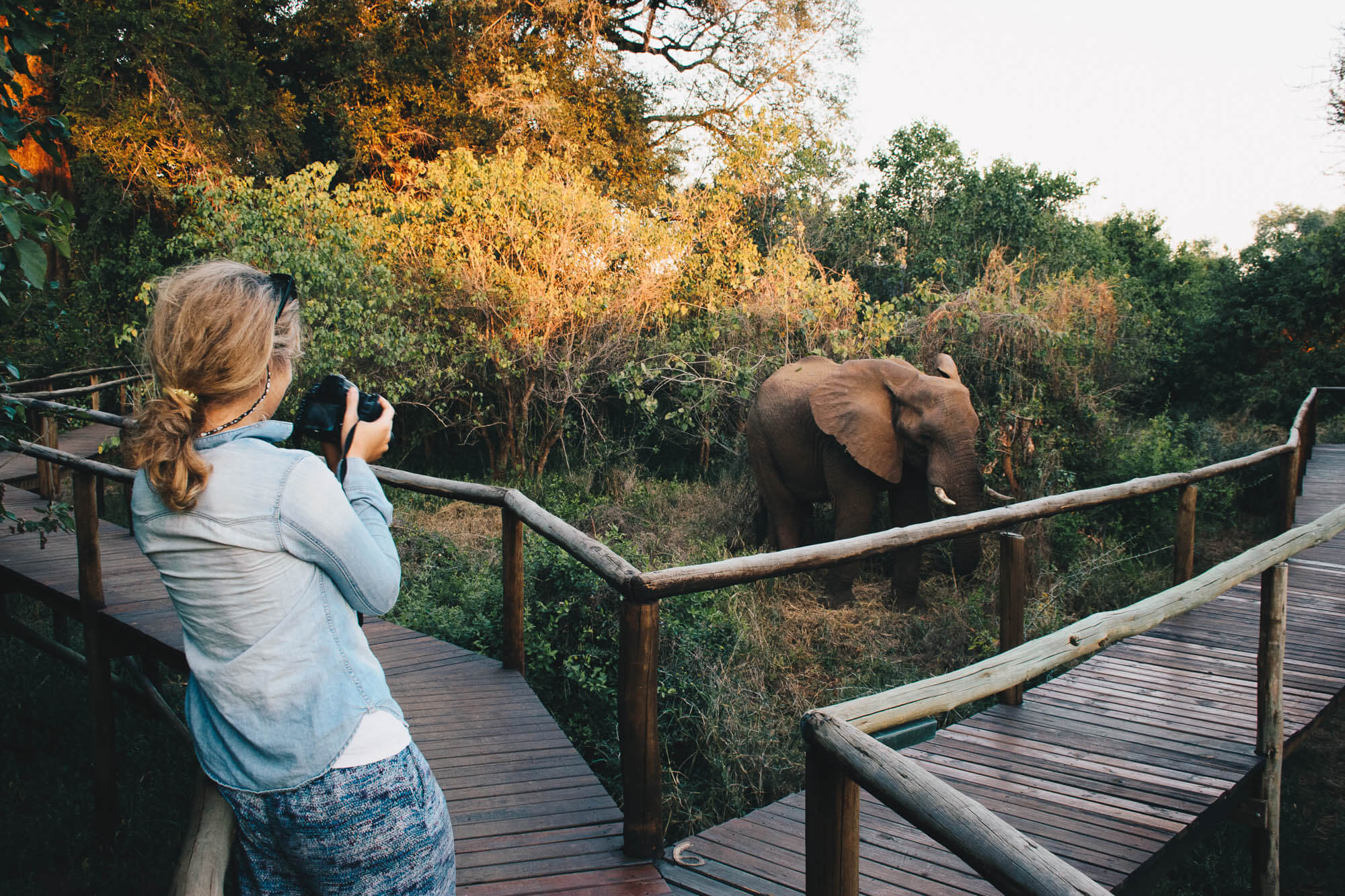 The calls of the baboons and vervet monkeys add much to the bush ambiance, but they are not welcome in the camps, especially when the buffet meals are spread. They are fearless raiders and while their antics can be amusing, it’s not healthy for them or us to have them habituated to using the camp as a food source.

Other birds and beasts are appreciated, a menagerie to be enjoyed while reclining with a book and cocktail. Nyala and bushbuck are always nearby, foraging in the shade. Kingfishers and flocks of white fronted bee-eaters are vivid against the earth tones of sandstone and bushveld. The trees that shade us are home to nests and roosts that are most evident from the nocturnal sounds. Bush babies (Southern lesser galago) stir themselves after nightfall, their frequent vocalizations leading us to search by torchlight for their out-size eyes. When scared they make a high-pitched whistle. 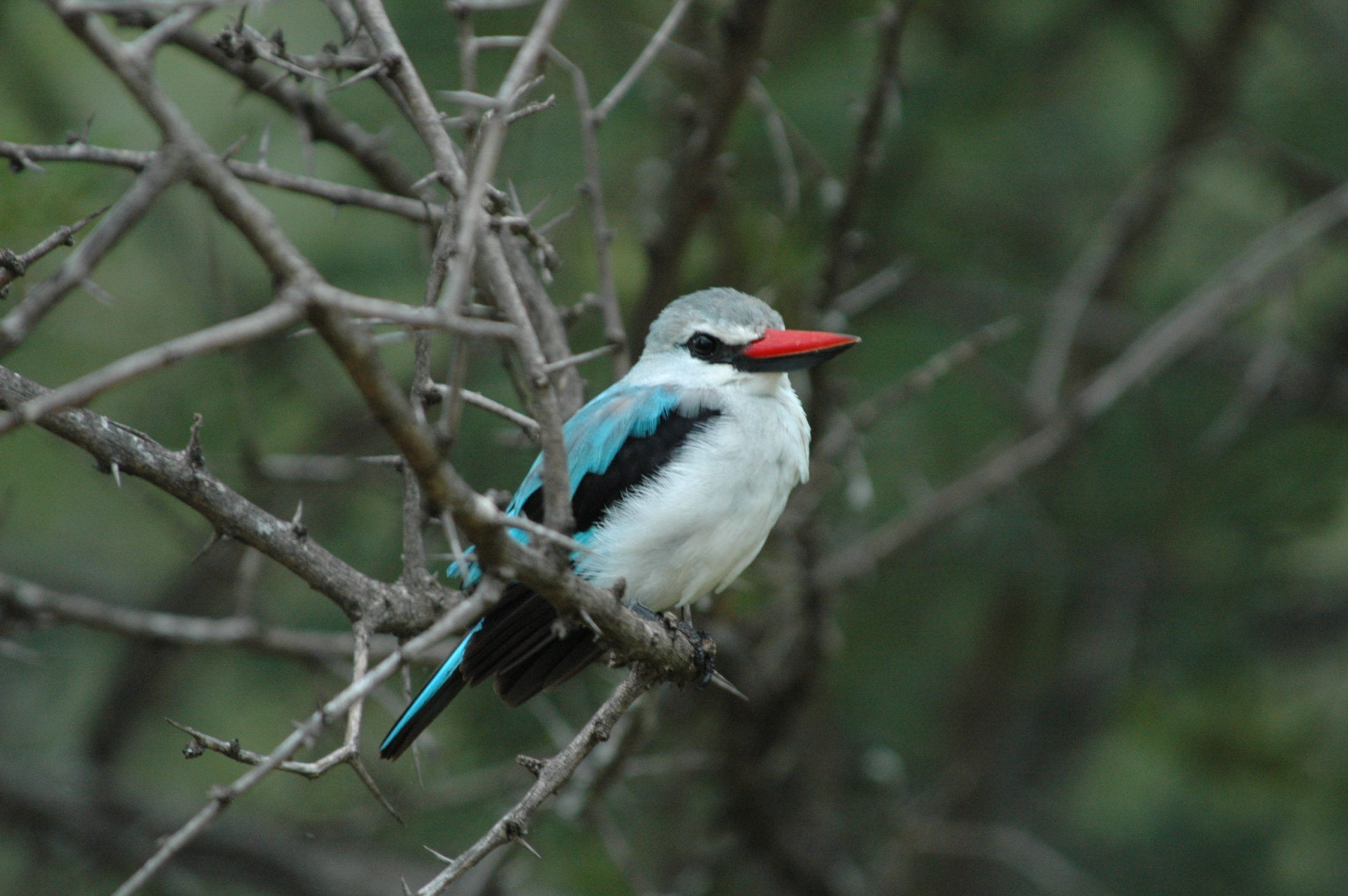 Genets are commonly spotted in both camps in the evenings, attracted by the smell of the braai. The riverine habitat and large trees suit them, and the larger civet too.

I have written here before about the magical sounds of owls, but they are not the only birds to give us bedtime music. The nightjars can be hard to tell apart by sight, but at night the different songs tell us that both fiery-necked and square-tailed (Mozambique) varieties are present. The call of the fiery-necked nightjar is clearly that of a bird, but the Mozambique nightjar makes a long churring sound, and when I first heard it I thought it was a frog or insect. As long as they are not directly over the tent, the soulful sounds of both are soothing. They are telling us that we are the visitors here, not them.

The Smuts Track – Table Mountain Walking at its Finest